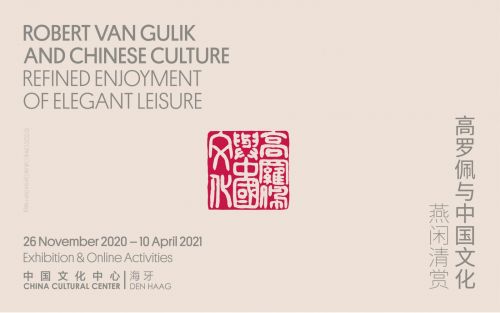 Robert van Gulik高罗佩 (1910-1967) was a well-known Dutch writer, sinologist and diplomat famed for bringing back the Chinese Tang dynasty hero Judge Dee in his historical detective novels, which enabled readers around the world to delve into and experience the traditional Chinese way of life. In China, Judge Dee is the protagonist of films and television series and van Gulik is revered as one of the world’s greatest sinologists of the 20th century.

On 17 December, China Cultural Centre in The Hague successfully held the online opening of the exhibition Robert van Gulik and Chinese Culture, Refined Enjoyment of Elegant Leisure. The exhibition will be held till 10 April 2021. The opening ceremony was co-chaired at the same time by  Director of the Centre, Mr. Huang Hongchang, and guest curator, Ms. Marie-Anne Souloumiac.

Mr. Huang firstly introduced the concept and initiatives of the exhibition. He said, “In order to commemorate the 110th anniversary of the birth of the famous Dutch sinologist and diplomat Robert van Gulik, and to inspire the younger generation in the Netherlands to continue their enthusiasm for Chinese culture, China Cultural Centre in The Hague is delighted to present Robert van Gulik and Chinese Culture, Refined Enjoyment of Elegant Leisure, this exhibition will also be complementing the exhibition taking place at the Rijksmuseum Robert van Gulik en Zijn Passie voor Chinese Kunst at the same time.”

Pauline van Gulik, daughter of Robert van Gulik, was the only invited guest on site the exhibition hall of the Centre for the online opening event. She noted in the opening speech, “Wherever my father was stationed around the world, the first thing he would do upon arrival in his new home was to locate a room for his study, carefully placing his books in the exact order he wanted them to be, his next step was to decorate his study in such a way that it would echo the taste of a Chinese literati scholar with all its attributes, calligraphy and  musical instruments etc. Some of which are on display here.”